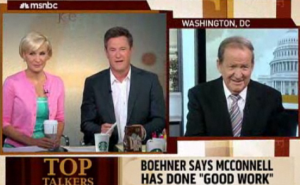 Senate Minority Leader Mitch McConnell unveiled a “back-up plan” yesterday to guarantee that the debt ceiling would be raised, but only through a procedure by which Republicans wouldn’t have to cast a vote in support of it. The potential shift of power (and blame) to President Obama to raise the debt ceiling without any mandatory spending cuts has infuriated many, and on Morning Joe, Joe Scarborough and Pat Buchanan voiced some of the conservative frustration.

Scarborough suggested the fact that Speaker of the House John Boehner supports this “back-up plan” as well, is evidence that Wall Street is speaking through the Republican leadership and that Wall Street demanded signals from Washington that despite the tough talk, no one would actually allow the debt ceiling to not be raised. Scarborough believed the Republican’s introduction of the plan “completely destroys their negotiating power” and feared:

“This is the end of any hopes of any real deficit reduction. They are giving Barack Obama complete power . . . this is a complete betrayal of the Tea Party, of everything Republicans talked about during the 2010 campaign. . . . This is horrible, this is a nightmare and you know what, it is cynical.”

Buchanan agreed, labeling the strategy “unheroic” and considered it to be a “strategic defeat” in that Republicans have concluded they can’t win this battle, and should save themselves to fight for a later day. Given the drastic disappointment of both Scarborough and Buchanan, Mika Brzezinski appropriately wondered “if this is raising the white flag, if this is going against the base directly, what’s the difference between this and actually cutting a deal . . . what makes this better?” Buchanan suggested any deal with tax increases would be “total, utter capitulation” and would guarantee “Boehner and McConnell would both be out of a job.” So instead it seems like McConnell’s plan might still be capitulation, but maybe since it’s arguably “strategic” there’s a chance any Tea Party disappointment with him might not be permanent.