Joe Scarborough: GOP Must Be Embarrassed By Herman Cain Now 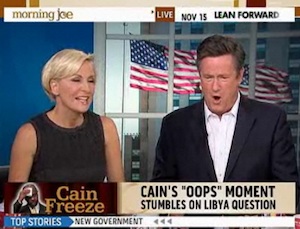 On Morning Joe, Joe Scarborough went on a lengthy rant about Herman Cain‘s disastrous interview with the Milwaukee Journal-Sentinel and how the Republican Party has failed to take his guidance which they now are regretting. “The thing is when I started criticizing Herman Cain early on, of course all the right-wingers attacked me,” Scarborough blustered. “Not Eric Erickson, but most of them. Now we saw Eric Erickson’s review. Michelle Malkin is now talking about how badly this is getting. I was embarrassed about this weeks ago. I was embarrassed that a man that can’t answer a basic question is representing my party. That embarrassed me. It didn’t embarrass a lot of people. Guess what, i think they are embarrassed now.”

“It’s a flawed field,” added Time‘s Mark Halperin. “It is embarrassing for the party to have someone who — not only doesn’t know the answers to questions — but to also say ‘Oh, the president doesn’t need to know these things.”

Scarborough continued his self-righteous jeremiad. “I have said things about Republicans and then I have been bashed by the far-right for telling the truth about weak Republican candidates,” the MSNBC host lamented. “I hate to say, look, look, but this happens so much. So much, that I’m just getting really tired of it. Four years later, my conservative credentials are being questioned because I tell the truth about somebody before the rest of the world tells the truth about somebody. It’s like looking at a sprinter that runs an 8.7 40 and say he may not be fast enough to win the Olympics.”

Watch Scarborough go off on the Republican Party’s criticism over his opinions below via MSNBC: