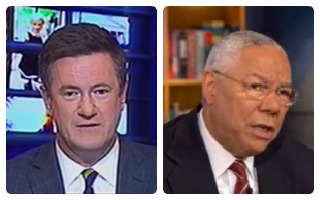 Gen. Colin Powell has frustrated Republicans in recent years. He endorsed Barack Obama in 2008 and 2012, and recently took to the set of Meet the Press where he accused the GOP broadly of looking “down on minorities. He added, a “dark vein of intolerance” runs through the Republican Party – a political affiliation Powell still maintains. But if many Republicans are frustrated by Powell’s remarks, MSNBC host Joe Scarborough is not among them. He appeared on Hardball with Chris Matthews on Wednesday where he said that the GOP needs Powell and what he represents far more than it needs people like Republican candidates who lost statewide races in 2012 like Todd Akin or Richard Mourdock.

Matthews outlined the problem conservatives face by listing a number of groups and demographic segments of society that he claimed had once been attracted to the Republican Party but have since abandoned the GOP. “How do you abandon those people and still keep a part?” Matthews asked.

Matthews introduced Scarborough who he described as a “passionate believer that political can get better.”

“How do you keep this huge tent the Republican party has built?” Matthews asked, noting that the “people on the fringe” who have now taken over the party are costing the GOP its image.

“Well, you’ve got to stand up to people on the fringe,” Scarborough shot back. “When parties go extreme, they get roundly defeated.”

Scarborough concluded by saying that the party can attribute most of its recent losses in national elections to extreme voices on the far right of the Republican Party.