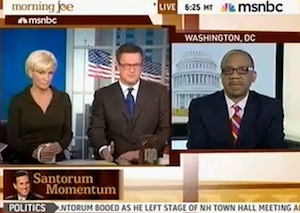 “Do you think you may have gone overboard a little bit in your criticisms of Santorum?” Scarborough asked. “We haven’t talked about it. I’m not setting you up for anything. I was taken aback by what you said. My wife likes you very much, couldn’t believe you said it.”

“That was obviously not the right way to say what I was trying to express,” Robinson acknowledged.

Robinson had earlier said Santorum’s handling of his newborn was a “weird story” on Wednesday night’s The Rachel Maddow Show:

Some of his positions he’s taken are just so weird, that I think some Republicans are going to be off-put. Not everybody is going to be down, for example, with the story of how he and his wife handled the stillborn child whose body they took home to kind of sleep with and introduce to the rest of the family. It’s a very weird story.

“I certainly didn’t mean to offend anybody, especially Mr. Santorum,” Robinson added. “But it was in a discussion of his views, and, you know, which I consider extreme, and Santorum himself who is a cultural — culture warrior extraordinaire, whose faith — and we all appreciate someone of deep faith — but it is — it is extremely deep, and it’s a kind of faith that some people, I think, are going be… if not surprised by… at least want to know more about.”

“That’s fair enough, but is it the decision about what you do with an infant that passed away a highly personal decision?” Scarborough pressed. “This was not a stillborn child. This was an infant that was born and that lived for a few hours, and there are actually pediatric specialists who say the family needs to say good-bye to that sort of child. Children, if you make that decision, parents, could get closure that way too. Why touch it? Why would you even talk about it? That’s a really personal decision, isn’t it?”

“It is a personal decision,” Robinson noted. “And I’ve certainly been educated on the subject since — in the past day, so I do understand that — that this is not — it’s not something that’s in any way beyond the pale or considered inadvisable and that many grief counselors do advise a period of saying good-bye to a child who tragically dies in that way.”

“Do you wish you hadn’t written that part of it?” Scarborough asked.

“Do you wish you hadn’t said it?” Scarborough clarified. “You can see how prepared I am.”

“I wish I hadn’t said it that way, Joe. You know, I — we had — had this sort of discussion when I wrote about Chris Christie‘s weight, and I do think that a columnist has an obligation to — to write what he or she thinks and write what he or she sees, but obviously I did it in the wrong way. Or in a way that rubs people the wrong way, and that’s not what I intended.”

Watch Scarborough heated questioning of Robinson about his remarks about Santorum’s handling of his dead newborn below via MSNBC: