Joe Scarborough: ‘Grover [Norquist] Is Over When Americans Think They Aren’t Taxed Enough’ 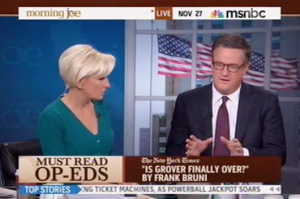 On Tuesday, the Morning Joe crew sought to answer the question, “Is Grover finally over?” In response to those consistently criticizing Grover Norquist, Joe Scarborough drove home his own point about the polarizing man behind the pledge not to vote to increase taxes. Norquist isn’t the “bad guy,” Scarborough said. And he’ll only be over when Americans decide they aren’t taxed enough.

Deeming Norquist a “public relations genius,” Scarborough said, “Grover’s power doesn’t come from Grover.” He’s selling an idea that people have already bought into, he argued, offering up an example: “It would be like if I went to Capitol Hill and represented sunshine.”

“The only reason why Grover has any power is because he chose an issue that guys like me believe in anyway,” Scarborough said. “Grover’s not the bad guy. If you hate Grover, then you hate the elected representatives that signed the pledge just so they could have a piece of paper to hold up to represent what they were doing. I never, in seven years in Congress, met somebody going, ‘I don’t know what to do because Grover might be upset.’ No, they go, ‘I’m not voting to raise taxes because I’ll have my ass primaried, and I’m not coming back here. And I like getting elected.'”

“Grover has no power outside of the issue that he carries,” he added.

At the end of the segment, he answered the question that led the discussion: Is Grover over?

“Grover is over when Americans think they aren’t taxed enough,” Scarborough said. “That’s when Grover’s over.”