Joe Scarborough Helps Donald Trump Out of His Nazi Jam

Perpetually embattled GOP presidential frontrunner and Balsamic reduction of Republican base voters Donald Trump has been taking a good bit of flak for leading his rally crowds in Nazi-esque salutes in the guise of raising hands to “pledge” their votes, including from former Anti-Defamation League head Abe Foxman. On Tuesday’s Morning Joe, though, host Joe Scarborough rode to Trump’s rescue.

In yet another live MJ phoner, an exasperated Scarborough reluctantly asked Trump about how “in the media, there have been some people who have taken still pictures to make it look like” his crowds are giving Nazi salutes, by which he presumably means “taking pictures of Trump’s crowd,” the sneaky devils.

Trump called the comparison a “stretch,” and said that this morning was the first he’d heard of the controversy that’s been roiling since Saturday.

Then Scarborough buttoned it up with this enthusiastic agreement:

All of us around the table, I think, actually agreed it was equally crazy, but just needed to ask it.

And this wasn’t even Scarborough’s most egregious bit of Trump-a-ganda; earlier in the show, he confessed that this was the first time he had seen the footage, absurdly likened it to a Baptist worship service, and then told a great, big, fat lie (emphasis mine):

Scarborough: This is the first time I’ve actually seen the video. Think people are once again hyperventilating. We do that in Baptist churches all the time. All heads bowed and eyes closed, raise your hand if this — I mean, people do that. I don’t know. Mike Barnicle, did that look like a Nazi salute to you?”

Mika: Are we really having this conversation?

Scarborough: We’re really having this conversation because there are people at respected newspapers that are writing and they’re showing a quick clip when people first raised their hand to make it look like a fascist salute.

First of all, Baptist churches aren’t like meetings of the Order of Stonecutters, people can actually check that, and no, there is no Baptist custom of raising your right hand in unison. Folks raise one or both hands and wave or sway them if they catch the Holy Spirit, but it doesn’t look like this: 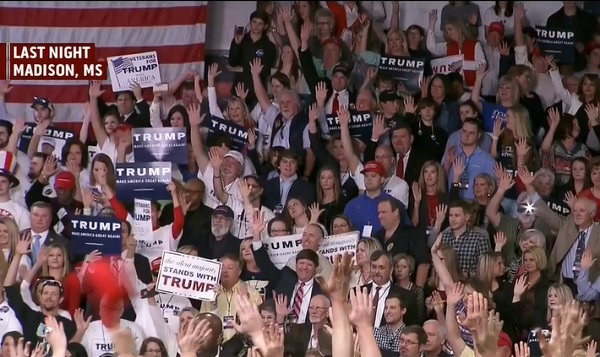 But more importantly, Joe Scarborough is lying. I’ve seen this “pledge” story reported everywhere for days now, and only once has the full context, of Trump asking them to pledge to vote for him, not been included, and that was in the clip Scarborough played. It’s a self-evident lie because he makes that completely false claim right after saying he’s just seen the footage for the first time.

While it’s great that the Anglos at the Morning Joe table agree that the Jews and Jew-lovers are just “hyperventilating,” it’s importnt to at least here them out. Here’s the statement from Abe Foxman that Scarborough finds “crazy”:

“As a Jew who survived the Holocaust, to see an audience of thousands of people raising their hands in what looks like the ‘Heil Hitler’ salute is about as offensive, obnoxious and disgusting as anything I thought I would ever witness in the United States of America,” he told The Times of Israel.

“We’ve seen this sort of thing at rallies of neo-Nazis. We’ve seen it at rallies of white supremacists. But to see it at a rally for a legitimate candidate for the presidency of the United States is outrageous.”

“It is a fascist gesture,” Foxman said. “He is smart enough — he always tells us how smart he is — to know the images that this evokes. Instead of asking his audience to pledge allegiance to the United States of America, which in itself would be a little bizarre, he’s asking them to swear allegiance to him.”

Now, you can argue over whether Trump knew in advance how this would look, but once the crowd thrust those arms in the air, well, even Clayton Bigsby would recognize the visual it evoked. That didn’t give Trump pause, even during a week when his intermittent disavowal of white supremacist David Duke dominated coverage of his campaign, and that blindness, of course, extends to Trump’s greatest media cheerleaders, the Morning Joe crew.