Joe Scarborough: I Told You ‘Hands Up, Don’t Shoot’ Was a Lie 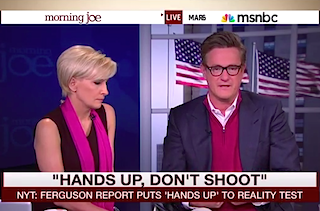 In presenting the Justice Department’s new report on Ferguson, Attorney General Eric Holder said of the “hands up, don’t shoot” mantra that followed Michael Brown’s shooting, “It remains not only valid — but essential — to question how such a strong alternative version of events was able to take hold so swiftly, and be accepted so readily.” This morning, MSNBC’s Joe Scarborough essentially said, I told you so.

As protests against the grand jury’s decision to not indict Officer Darren Wilson raged last fall, Scarborough vocally denounced Democratic members of Congress, players for the St. Louis Rams and even his own colleague for making and promoting the gesture in solidarity with Brown.

“You don’t have to make things up,” Scarborough said Friday morning. “That’s all I saying at the time.” He said the criminal justice system is already “so bad” that there was no reason to exaggerate what happened in this case. “It wasn’t true, I said it wasn’t true at the time. There were a lot of people who called me a racist and a bigot despite 51 years of a life far different than that.”

“That’s what we do here, by the way, we tell the truth as we see it,” he continued. “And you can call us bigots if you want to because it doesn’t line up with what you believe,” he added, but that’s not going to stop him from telling the truth.

RELATED: Megyn Kelly Loses It over Ferguson Report: ‘Hands Up, Don’t Shoot Did Not Happen!’

Offering an alternative perspective, Mika Brzezinski said, “I don’t think a lot of people were making it up. I think they were jumping on a narrative. Because of the wider problem, they felt it must be true. And if you look at the data out of Ferguson, it’s a horrific situation.”

In addition to finding that Officer Wilson was evidently justified in killing Brown, the Justice Department also released data showing that between 2012 and 2014 African-Americans in Ferguson made up 85 percent of traffic stops, 93 percent of arrests, 90 percent of all citations and 93 percent of jaywalking tickets, despite the fact that they make up just 67% of the population.