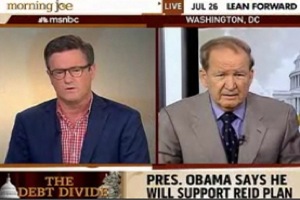 Joe Scarborough was surprised both President Obama and Speaker John Boehner gave political speeches last night with no new news, yet was even more shocked that Obama wasn’t aggressively fighting for his position. Scarborough argued that Democrats do not have the “courage of their convictions” to raise taxes, and that Obama was caving now on closing loopholes, just as he caved on ending the Bush tax cuts. Most on the Morning Joe panel agreed with calling Obama the loser in the battle, except for Harold Ford Jr. who thought he was being “responsible.”

“I’m stunned that the President is going to deliver to his opposition total and complete victory. I would not do it if I were sitting in that chair. . . . Unless you’re willing to take your opponents to the wall, you’re going to lose these fights more often than not.”

And The Daily Beast’s Tina Brown agreed, saying “this is a trifecta of success for the Tea Party and whichever way you spin it he was crushed, so then he’s going to go out on the road for six months basically as a loser.”

Scarborough feared Obama is now perceived to be a weak leader, unlike former President Bill Clinton who “wouldn’t put up with this” and was able to crush the Gingrich revolution during the last major budget fight. Pat Buchanan summed up Obama’s position simply enough at the very end of the conversation, suggesting “he’s been whipped, there’s no question about it.”