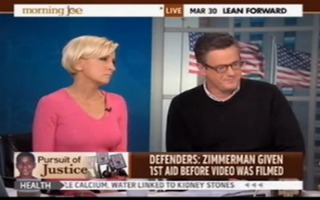 On MSNBC’s Morning Joe, host Joe Scarborough delivered a devastating critique of conservative sites that have engaged in a coordinated effort to tarnish the reputation of Trayvon Martin in death.

Scarborough warned those yet-unmentioned conservative sites to heed the voices of more enlightened Republican opinion journals, like National Review, to “not take this up as a cause.” Scarborough refrained from naming Tucker Carlson’s The Daily Caller, but he was clearly referencing their publication of Tryavon Martin’s Twitter feed.

Scarborough took particular issue with the efforts to posthumously paint Martin as a thug who deserved to be killed by virtue of his social media interactions. He lamented that “some racist websites, but also sadly some fairly mainstream websites are actually going into Trayvon Martin’s social media pages, be it Twitter or MySpace, and their trying to find ominous looking picture while skipping over pictures of him holding up a birthday cake smiling, him fishing with his dad, him standing outside proudly of his home dressed in a tux ready to go to prom.”

“This is beneath contempt,” said Scarborough. “These people on the far right are being fools to try to make this a political issue.”

“Some out there are marginalizing themselves, making fools of themselves. I guess it’s because the President actually said something to comfort the parents, and I guess they just can’t handle that,” said Scarborough. “I guess in their warped, twisted, distorted, political worldview, that makes this dead 17-year-old boy –who was kept in the morgue for three days before they even notified his parents—I guess that makes it okay?”