Joe Scarborough Laments GOP ‘Distractions,’ Particularly ‘Somebody Throwing Up On Their Sweater Vest’ 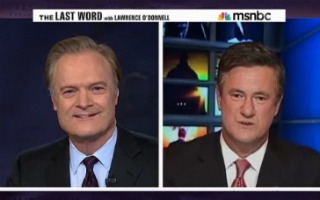 Last night, MSNBC host Lawrence O’Donnell credited one particular Republican with sounding an alarm regarding the Blunt Amendment. The GOP must handle with issue with caution, he had warned, because soon “it stops being about freedom of religion and starts being about contraception, then Republicans will get routed in swing areas.” That Republican? O’Donnell’s network colleague Joe Scarborough, whom he’d invited onto the show in order to discuss the matter further.

Scarborough shared that his wife — who is “very pro-life” and who has never voted for a Democratic president — is now asking “what’s happening to our party?” The reality is, he said, the party is losing people by focusing on the issues of contraception rather than myriad other issues that concern voters, such as health care in general or the economy. He also alluded to Rick Santorum’s recent comments about what a snob President Obama is for saying every American should have a college education, calling this type of talk a “distraction.”

O’Donnell seemed particularly amused at Scarborough’s comment that JFK’s speech about the separation of church and state made “somebody” want to “throw up on their sweater vest.”

Ultimately, said Scarborough, despite Romney’s hopeful poll numbers of late, the party seems intent on driving away female voters, moderates, Independents and voters in swing states, and that even the base agrees this is a major problem. Why, they’re asking, are we letting the President or Harry Reid or Nancy Pelosi off the hook by focusing instead on polarizing side issues?

In memory of the recently deceased Davy Jones, Scarborough joked, let’s all remember that the issue of contraception was more or less settled back in the 60s.

RELATED: Joe Scarborough: Frustrated Republicans Who Would ‘Vote For Their Dog Over Obama’ Haven’t Warmed To Current Field

Speaking of Santorum? Scarborough doesn’t exactly have high hopes for him, particularly because of his adherence to these aforementioned side issues.

Have a look, courtesy MSNBC: