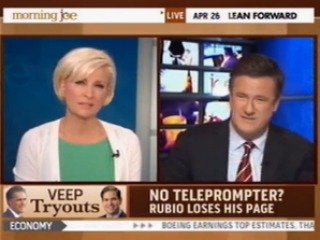 On Thursday, Morning Joe hosts Mika Brzezinski and Joe Scarborough delved into the question of whether Florida Senator Marco Rubio — whose name continually pops up when talk turns to Mitt Romney’s potential pick for VP — is prepared to take on the task. Oh, and they also talked about Rubio losing the last page of his speech on foreign policy. Slightly awkward, that.

After showing a clip of Rubio’s briefly awkward moment at the podium, Brzezinski shared that “I almost don’t want to… Having said that, it could have been handled a little differently. Like maybe knowing the content.”

Scarborough didn’t think it was really such a big deal. “Listen,” he said, “it happens. I mean, it happens. Some of us just can’t talk for three hours without a script or teleprompter. Some of us are normal human beings.”

Listen, it was a good speech, first of all. I like Marco an awful lot, and I think he has a bright future ahead of him. But I’m just going to say it. And why not? This is why people watch the show. Let me set myself on fire politically. Again, he’s not ready to be vice president. Just like Barack Obama wasn’t ready to be president in 2008, just like Sarah Palin wasn’t ready to be on the national ticket in 2008.

Marco Rubio is a great guy. He’s got a compelling story. And my God, what a great demographic he will speak to on a national ticket some day. But he is not ready to be on a national ticket in 2012. And Marco’s basically said that. He has said he’s not going to be vice president. Even though he’s backed off of it a little bit. I would just warn those who are fans of Marco Rubio, who think they’re doing him a favor by pushing him center stage right after he’s been elected to the United States Senate: back off. You’re going to hurt him in the long run because he’s not ready to be in the Oval Office. He’s not ready to be vice president of the United States.

Scarborough later turned the discussion over to panelist Richard Haass, asking him where Rubio falls “on the neoconservative line” when it comes to foreign policy.

“Well, yesterday’s speech, Joe, suggested he was trying to split the difference,” Haass responded. “He took a fairly tough approach towards Syria in favor of intervention there, also potentially of intervention on Iran. But again, the whole emphasis on partnerships is not the sort of thing traditionally you hear from neocons who are much bigger on America’s need to act alone if need be. So, actually, I thought it was an attempt by him to bridge the difference between the traditionalists and the so-called neocons in the Republican party.”

Have a look, via MSNBC