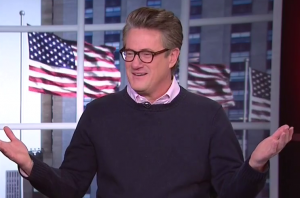 Correspondent Kasie Hunt played a video of Bernie Sanders attacking Clinton on the move during a live report. “So let me get this straight, Hillary Clinton had a fundraiser at a bank in Philadelphia yesterday?” asked an incredulous Scarborough.

“Wow. That’s interesting timing,” he responded. “Did she give a speech? I’m just curious. If you can pick up a quarter million dollars in an afternoon, that must be nice.”

“She certainly handed Bernie that line on a silver platter,” co-host Willie Geist agreed. “The group is called Franklin Square Capital.” (“You can’t make this up!” Scarborough laughed.)

“She was going to be in New York tonight raising money three days before Iowa?” piled on host Mika Bzrezinski.

“Wow, she must be very confident that the people of Iowa don’t care whether she’s there or with bankers raising money on the East Coast,” Scarborough snarked. “Well, and Bon Jovi, too… must be a really, really wealthy investment bank to afford Bon Jovi.”