Joe Scarborough: Gingrich Is A ‘Danger To America’ Who Would Destroy The GOP 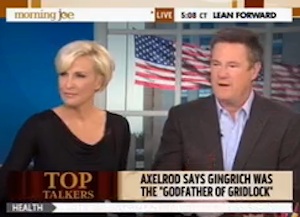 Joe Scarborough had harsh words for Republican frontrunner Newt Gingrich on the Tuesday edition of MSNBC’s Morning Joe, warning voters that the former Speaker of the House would “destroy the (Republican) party” if nominated. “If I’m a Republican in South Carolina and I don’t know just how erratic and undisciplined Newt Gingrich is, and what a danger to America he’d be, I would sit there and think, OK –here is a guy, Newt Gingrich, who faced down Bill Clinton in 1994, came in, gave Republicans their first majority in a generation,” Scarborough surmised.

“Gingrich masterminded a takeover, first in a generation, within a year we balanced the budget, had a balanced budget amendment out, within three years we balanced the budget for the first time in a generation, four years in a row for the first time since the 1920’s, passed welfare reform. All I’m explaining here is why Republican voters across America who haven’t seen the train wreck that has been Newt Gingrich’s political career and life would say you know what? I’m going to vote for him instead of Mitt Romney.”

RELATED: Morning Joe Looks To The Past To Gauge Newt Gingrich’s Eventual Collapse

“He is a bad person when it comes to demonizing opponents,” Scarborough continued. “When he puts on his political helmet he is a terrible person…Let me tell you something: the Republican establishment will never make peace with Newt Gingrich: they just won’t! They won’t: this is an important point. Because the Republicans I talk to say he cannot win the nomination at any cost: he will destroy the party. He will re-elect Barack Obama and we’ll be ruined. That’s going to happen. I mean Newt Gingrich would possibly win 100 electoral votes.”

Watch Scarborough’s blunt assessment of the Republican frontrunner in multiple clips below via MSNBC: