Joe Scarborough: Nobody Politically Fears This President At All Right Now 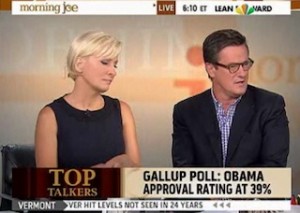 In the wake of yesterday’s political kerfuffle over President Obama‘s request to address a joint session of Congress on the same day as a GOP Presidential debate, pundits are quickly finding meaning in the schedule conflict. First up? Morning Joe‘s Joe Scarborough, who saw “speechgate” as evidence of Obama’s political irrelevance, adding that absolutely nobody in D.C. fears the White House. Mika Brzezinski countered with “If this were a Republican you would call the Democrats in Congress disrespectful.” Scarborough then gave an example of how he would have handled this if he were President.

When the story broke yesterday, I very early — and perhaps prematurely — called this a politically smart move for the White House, though at this stage of the overall narrative, it seems to be a renegade point of view. I still believe that the White House will eventually use this back and forth as an example of the president’s frustration with Congress, in hopes to align with independent voters who polls suggest are also frustrated with Congress. In fact, the subject line of an email sent out last night from the Obama campaign had but one word: “Frustrated.”

The other side of this strategy is that the frustration felt could be that independent voters see the President as being weak, having caved to an obstinate GOP House leadership, vis a vis John Boehner. This was the position of Scarborough, who laid in to the president with a “better to be feared than loved” mantra after establishing that August had been an awful political month for Obama.

Perhaps the most interesting back and forth came when Brzezinski expressed her frustration with the current political landscape, drawing a distinction of how this conflict have been different had a Democratic congress had rebuffed a GOP president, saying:

You know what offends me is the fact that there’s this bickering that perhaps might be trumped up by the media and reveled in. the president wants to do a joint session to doing a jobs address. Isn’t there one thing where both sides agree? don’t you lay that on the republicans a little bit? If this were a Republican you would call the Democrats in congress disrespectful.

Scarborough then responded by giving an example of what he would do and say:

You know what I would tell the Republicans if I were president? Be a man and deliver the speech wherever you want to deliver the speech and tell the Republicans to go to hell. I would start by saying ladies and gentlemen, I come to you tonight because we are in the middle of a great national crisis from california to maine, millions and millions of people are still out of work. I was hoping to go to the people os house to deliver this message to you. i was hoping to go to what i consider to be the symbol of American democracy. that light shining on top of that capital, which has been like a city shining brightly on the hill for all the world to see…”

I happen to believe that Brezizinski makes a salient point about the potential double standard at play. People have leveled legitimate criticism at the White House for what appears to be needless and petty politics with a joint session. However, the House GOP have been playing needless and petty politics with the White House for the past six months (see debt crisis debate leading to credit downgrade), though they seem to be immune to the same criticism that the White House has received.