Joe Scarborough: Nobody Thinks Romney Is Going To Win
video

Joe Scarborough: Nobody Thinks Romney Is Going To Win 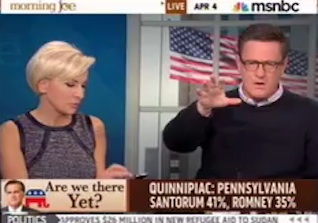 During the Wednesday edition of Morning Joe, host Joe Scarborough observed that “nobody” was expecting Republican hopeful Mitt Romney to beat President Obama in 2012.

“I don’t totally agree with that,” Time editor-at-large Mark Halperin interjected. “But even if you think Romney’s going to lose, there’s still, look ’16. If Romney loses, there’s so many strong candidates out there.”

“Are you serious?” Mika Brzezinski asked.

“There’s a bunch of them!” argued Halperin.

“A lot of their times have passed,” Scarborough noted. Watch his prediction below, via MSNBC: