Joe Scarborough: Obama Doesn’t “Give A Damn” About Deficits And Never Has 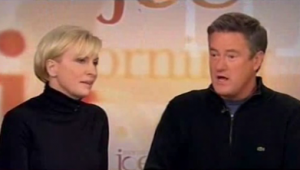 President Obama‘s tax compromise is not winning many fans with the extremes of either political party, which is often the sign of a good and fair compromise. However, now at least one moderate is furious with the President too. Enter Joe Scarborough, who on this morning’s Morning Joe unleashed a furious rant not only against Obama, but against all politicians who pretend to be concerned with the deficit:

In light of Mayor Bloomberg throwing cold water on the notion of a presidential ticket (once rumored to include Scarborough) maybe this is Scarborough’s attempt to reestablish his independent credentials and demonstrate a desire for something more in the future. Or maybe the hypocrisy of politicians who one week champion the importance of a deficit commission and the next week pretend the same commission never existed is too much for him to stomach. Only Tea Partiers Senators Rand Paul and Jim DeMint escape Scarborough’s wrath:

There are a couple of Tea Partiers that actually care about this issue. And nobody else in Washington does. Rand Paul does and DeMint said he’s going to vote against this because of deficits. Nobody in Washington cares about this.

Scarborough has long been one to give Obama the benefit of the doubt, and even defend him against some of the more vitriolic Republican criticism of Obama in the past. Now Scarborough’s new tone should find sympathetic ears amongst many concerned citizens.

With the tax compromise, Obama is playing Santa Claus just in time for the holidays and giving both Republicans and Democrats everything they want, while charging it all to the credit card. In fact, the only reason either party is upset is basically because they are jealous the other party got a larger gift. Real leadership requires treating fiscal responsibility as a regulatory restraint and not merely a talking point, and having the confidence to ask citizens to make sacrifices now rather than hiding tough decisions under the rug for the next guy to handle. Bush’s greatest weakness as President was leaving an economy in near financial ruin, and with Obama continuing the Bush tax cuts and mirroring a fear to actually address the deficit, it seems perfectly rational to be angry with Obama who might be heading towards the same result.