Joe Scarborough: Obama Has Been AWOL, But Grover Norquist Has ‘No Power’ In D.C. 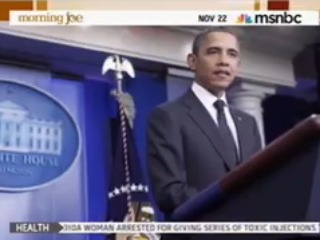 Addressing the Super Committee’s inability to come to a consensus regarding much-needed budget cuts, Tuesday’s Morning Joe panel mulled over what role President Barack Obama played in the talks demise, or what role he should have played.

Early on in the show, host Mika Brzezinski, noted that, for all the attention Americans for Tax Reform’s Grover Norquist has been given in the press, “both sides failed.” Host Joe Scarborough called into the show and offered his perspective:

The President of the United States is still the President of the United States. Democrats still control the United States Senate. Grover Norquist’s idea may be a strong one. Grover Norquist has absolutely no power in Washington, D.C., any the idea that he carries. And I am so surprised that Democrats really believe that the presidency is as weak as they believe it is now, that this President couldn’t step forward and show at least a little bit of leadership. He has been AWOL since he and Boehner failed on the debt ceiling. And he better react quickly or we are going the way of Europe.

Even earlier, panel member Willie Geist had posed an interesting question to his colleague Jon Meacham. “Jon,” he asked, “historically, do we romanticize the relationship presidents and Congress have? We talk a lot about Reagan and Tip O’Neill and all these relationships. Is President Obama’s–let’s call it a lack of relationship with Congress–is it exceptional? Is it worse than normal?”

It’s a little worse than normal. Because even though he was there, my sense is he doesn’t particularly like people and politicians who don’t like people are kinda in the wrong business.