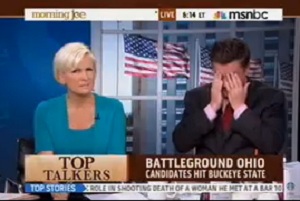 At a Tuesday campaign stop in Dayton, Ohio, the crowd gave Republican presidential candidate Mitt Romney a moment that summed up his candidacy in sad, yet hilarious fashion. Upon introduction of Romney running mate Paul Ryan, they cheered wildly and began to chant “Ryan! Ryan! Ryan!”

When Romney tried to redirect them into a “Romney/Ryan” chant, however, they petered out like a rusty faucet. MSNBC’s Joe Scarborough provided a priceless reaction on Wednesday’s Morning Joe.

Yes, Governor Romney, and this is some delicious pizza, isn’t he?

The crowd ignored Romney like he was Andrew Ridgely at a Wham! concert, except maybe one guy down in front, whom Romney thanked. That man, if he existed, later told reporters “I thought we were going to a bar, I was actually saying ‘Romney’s buying!'”

On Wednesday morning’s Morning Joe, co-host Mika Brzezinski played the clip for an aghast Scarborough. When it was all over, Scarborough had his face buried in his hands. “Oh, sweet Jesus,” he said.

Scarborough was so shaken that he began misquoting the Ave Maria. “What do the catholics say? Holy Mary, Mother of God? Pray for us sinners in thy hour of peace?”

Actually, Joe, it’s “…pray for us sinners now, and at the hour of our death,” perhaps a more apt prayer for Romney’s prospects, anyway.

Of that deadly enthusiasm gap, Scarborough said, “You don’t fix it,” adding that while “Mitt Romney’s a great man” and a “great father, a great husband. He is a great businessman, great turnaround guy,” he concluded that Romney is “a horrible politician. He’s one of the worst.”

Ed Rendell went on to hit the nail on the head about Romney, which is that he reeks inauthenticity because he’s running away from his naturally moderate politics. This happened in 2008, as well. As a governor, Romney actually did a decent job (although he was handed a pretty good situation), and when the 2008 campaign began, Mitt Romney was the Republican I would have voted for with a gun to my head (even the best Republican president is only as good as the looniest member of his congressional majority). By the end of that campaign, he was saying stuff like this:

Once again, Romney has run away from his moderate roots, and if yesterday’s crowd demonstrates anything, it’s that no matter how fast he runs to the right, he’ll never get near Paul Ryan, even with an honest clock.