Joe Scarborough On Gingrich: ‘This Guy Is Not Fit To Be President Of The United States’
video

Joe Scarborough On Gingrich: ‘This Guy Is Not Fit To Be President Of The United States’ 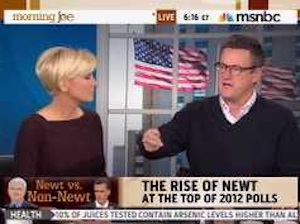 On Thursday’s Morning Joe, Joe Scarborough defended his criticism of Newt Gingrich from angry pro-Gingrich Twitterers, and gave a frank observation that the former Speaker of the House was not fit to be president.

“Last night I went on Twitter at the end of the day, just for a few minutes, and a lot of anger, outrage from Newt supporters. And they kept saying: why do you hate Newt? Why is it so personal? I don’t hate Newt. I don’t really, I never even got to know Newt. I felt kind of bad when the conservatives got together and drove him out of the speakership because he lost his ideological moorings,” Scarborough explained. “It’s not personal. I don’t really–I would say this about my mother. If my mom was like saying “anybody that got money from Fannie and Freddie should go to jail,” I’d say mom, you got money from Fannie and Freddie! It’s not personal to say this guy, to me at least, is not fit to be President of the United States.”

“I think it’s fairly clear in terms of your analysis that it is definitely not personal,” Mika Brzezinski chimed in. “I would have to say I don’t think I have the most unbiased view about him. And I get upset and it’s definitely personal, so I should be transparent about that.”

“I think you’ve been transparent about that,” Scarborough interjected.

Scarborough also felt compelled to alert Newsbusters that his remarks about Gingrich did not amount to support for President Obama. In a statement to the conservative media watchdog, Scarborough said, “The assumption of some Gingrich supporters that my critiques of their candidate can somehow be twisted into support for Barack Obama suggests a knowing ignorance of my political beliefs over 20 years.”

Watch Scarborough defend his criticism of Newt Gingrich below via MSNBC: