Joe Scarborough On Sarah Palin: “A Reality Show Star Who Cannot Be Elected” 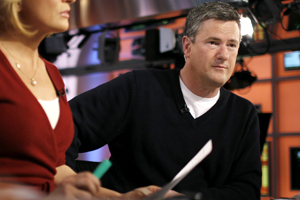 MSNBC’s Joe Scarborough has just lit a cannon in the civil war within the GOP–encouraging like-minded Republicans to step up and take on Sarah Palin: “Enough. It’s time for the GOP to man up.”

In a withering column on Politico, Scarborough dissects Palin’s resume, intelligence, and path to the presidency, calling her a huge problem for the party: “Republicans have a problem. The most-talked-about figure in the GOP is a reality show star who cannot be elected.”

Everybody knows that Palin is a busy woman. The former half-term governor of Alaska stays so busy these days that one wonders how this mother of five manages to juggle her new reality show, follow her eldest daughter’s dancing career and launch her latest frenetic book tour while still finding the time to insult a slew of revered presidents and first ladies.

You’ve got to admit hers is a breathtaking high-wire act.

What man or mouse with a fully functioning human brain and a résumé as thin as Palin’s would flirt with a presidential run? It makes the political biography of Barack Obama look more like Winston Churchill’s, despite the fact that the 44th president breezed into the Oval Office as little more than a glorified state senator.

Could Morning Joe’s call to “man up” become the rallying cry for an intensified fight in the GOP civil war that has raged–albeit quietly at times–since the emergence of Palin and candidates like Christine O’Donnell, who famously blamed “Republican Cannibalism” for her loss?

Karl Rove, for his part, has been out in front, and drawing criticism, for his comments on the Tea Party as an “unsophisticated” movement.

Palin is not a stupid woman. But like the current president, she still does not know what she does not know. And she does know how to make millions of dollars, even if she embarrasses herself while doing it.

That reality hardly makes Palin unique, but this is one Republican who would prefer that the former half-term governor promote her reality shows and hawk her books without demeaning the reputations of Presidents Reagan and Bush. These great men dedicated their lives to public service and are too good to be fodder for her gaudy circus sideshow.

If Republicans want to embrace Palin as a cultural icon whose anti-intellectualism fulfills a base political need, then have at it. I suppose it’s cheaper than therapy.

But if the party of Ronald Reagan, Paul Ryan and Marco Rubio wants to return to the White House anytime soon, it’s time that Republican leaders started standing up and speaking the truth to Palin.

Scarborough’s use of “Man Up” as a means to rally troops against Sarah Palin is likely to be predictably derided by some, but that’s not the point here. Scarborough wants a fight for the soul of the Republican party, and he does not like where that battle is headed. Watch video from MSNBC’s Morning Joe (via Politico) of Scarborough talking about Palin below?