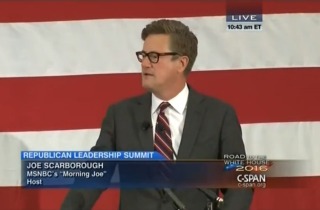 The second day of the New Hampshire Republican Party’s “First in the Nation” leadership summit kicked off Saturday morning with a speech from MSNBC’s Joe Scarborough, a former GOP congressman.

As you might expect, the reception was lukewarm at first — especially when he tried to land a series of fratboy-ish jokes — but became much warmer when he talked actual policy and tried to stir the crowd into rallying around conservative principles for the 2016 election.

But let’s run through his awkward jokes:

Scarborough approached the stage to noticeably tepid applause (though, to be fair, this was the first event of the day), and immediately tried to land a Hillary Clinton zinger: “We had Hillary announce on Sunday, though, I have to say, I think it’s interesting she decided to announce to the world she was running by e-mail. I don’t know I would have that if I were Hillary. Think about it. Why would you do that? It’s like Alex Rodriguez deciding that he would pass out business cards shaped like a syringe. You can do it, but why? I’m sorry, I’ll never get along with Yankees.” [Sports! Always a crowd-pleaser!]

On Jeb Bush and Marco Rubio: “This is Florida versus Florida, right? For us from Florida, this will be more intense than FSU versus Florida. Jeb Bush tearing up five years ago when introducing Marco Rubio, saying, ‘I love him so much it makes me want to cry.’ This week, [MSNBC reporter] Kasie Hunt interviewed Jeb in New Hampshire and said, ‘What do you think about Marco?’ He said, ‘I love Marco,’ and then he went off to cry.’ Jeb will be fine, believe me, but what a race.”

On winning elections: “It comes down to math. It just comes down to math. Counting the votes, getting your people out. Listen, this is a simple concept. I am a simple man. I’m not even good at math. I went to the University of Alabama. We may not be good at math, but we don’t have to be, because every year we just have to count to number one. [Mild laughter.] Hey, I don’t need any of that talk back there. If you are for the [Ohio State] Buckeyes, you can leave. If you are a Notre Dame fan, we can talk about that.” [Sports! Again! Totally nailing it!]

But then Scarborough got serious, warning the crowd about how the Republicans need to win 2016 — “the most important election of our lifetime” — because without a GOP president in 2017, “we will lose the courts and the federal government for a generation, and we just cannot afford that.”

(Side note: Why was an MSNBC host speaking at an explicitly political event like the NH GOP’s leadership summit? We’ve reached out for comment.)

Watch the opening clip below, via C-SPAN: