Joe Scarborough Reacts To Romney Hidden Cam Footage: He Does Sound Like A Plutocrat 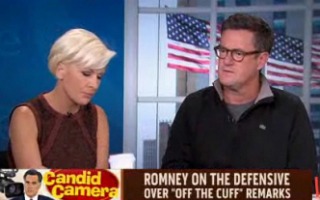 On Tuesday, the Morning Joe panel turned its attention to the recently-released hidden camera footage of presidential candidate Mitt Romney telling an audience of donors that 47 percent of voters are “dependent” and will vote for Barack Obama no matter what.

Host Joe Scarborough was particularly taken by how fluid and confident Romney sounded while addressing those donors at a fundraising dinner in Florida, pointing to the fact that Romney was saying what he truly believed.

Scarborough then noted that, early on in their race to the White House, George W. Bush and Karl Rove would campaign among people they knew very well would never vote for them because they were keenly aware that it would appeal to voters who were on the fence, and they wanted to show that they weren’t “old line Republicans.”

Scarborough then shared that he, personally, truly believes the Republican economic policies really can help everyone along the economic spectrum, not simply the one percent or even just the middle class. Romney, on the other hand, ends up sounding “like a plutocrat” or like Thurston Howell rather than, say, like Paul Ryan or Reagan.

He then asked fellow Republicans and conservatives the following: “Who dismisses 47 percent of the American populating as victims? You know what, I want everybody to vote for the truly conservative candidate.”