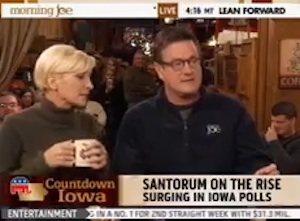 On Monday’s Morning Joe, Joe Scarborough surmised there would be backlash amongst Republicans if Mitt Romney was seen easily winning the nomination in the early states. “Anybody who thinks it’s going to be over after Iowa and New Hampshire, if Romney wins, does not understand the conservative base,” Scarborough opined. “There will be blood if Mitt Romney seems like the guy who’s going to walk away with it.”

Mark Halperin then said that nobody was going to drop out after the Iowa caucuses. “I think even Michele Bachmann will go, try to fight on in South Carolina,” Halperin predicted. “It’s perfect for Mitt Romney to have a crowded field in South Carolina.”

“I will tell you this. I know this sounds crazy, but if I’m just looking at the field right now: keep your head down, don’t blow yourself up in Iowa, because there’s going to be a lot of teeth gnashing and weeping after the guy that’s got a 24% ceiling wins Iowa and the conservatives split,” Scarborough added. “Cause everybody’s going to start looking and saying OK, who is the conservative? We are not going to allow a guy that has the 24% of the moderates in the Republican party voting for him, while this conservative party pushes another, let’s say, Gerald Ford to the finish line. By the way, I need to explain this. This isn’t necessarily what I feel. I need to explain this. I’m telling you, as I predicted, crazy never wins in the Republican party, and it doesn’t.”

Watch Scarborough’s predictions for the Republican race below via MSNBC: