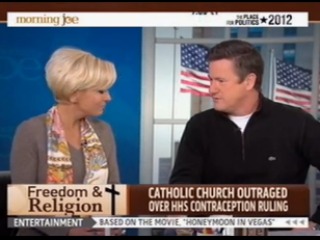 On Tuesday’s Morning Joe, hosts Joe Scarborough and Mika Brzezinski continued to tackle the controversial birth control mandate that has many religious groups and institutions — such as the Catholic Church — speaking out against it.

Scarborough, for one, found the “one year grace period” extended to the Church to be insulting. “Here is the deal,” he said. “We’re going to ask you to go against two thousand years of Catholic beliefs, but you know what we’re gonna go? We’re going to give you a one year grace period to work through it. So, at the end of one year, you can then throw away your beliefs of 2000 years.” But that wasn’t the only issue he had with it:

The number one issue — it is not relevant to me what 28 states do. What is relevant to me as I’m judging President Obama’s performance and Kathleen Sebelius’ performance, is what is my federal government doing? My opinion as far as federalism goes, states should be able to do what states want to do on whatever issues. It’s the federal government that impacts all of us. That’s the real concern.

He also looked at the debate in a larger, further-ranging context:

It’s fascinating what the Left is doing today. What they’re doing today is what the Right did against Muslims during the Ground Zero issue where, instead of talking about the issue at hand whether Muslims have a right to have a community center at Ground Zero, the Right just attacked the bad actors in the Muslim faith. What I’ve seen the left do over the past 48 to 72 hours is first of a all try to make this about Mitt Romney or about what Catholics did during World War II or try to make this about what Catholics did… No, just ad hominem attacks on… “Oh, well, this is the same Church that rapes little boys and stood by and let Hitler kill 6 million Jews. The Catholic Church is being attacked by so many people out there in the blogosphere and on the far left. And that’s not the relevant position. Mitt Romney’s position is, to me, is irrelevant. I’m not a supporter of Mitt Romney’s. What’s relevant is what the White House is doing.

The panel did agree, however, that — whether one supports the mandate or not — the White House did not handle it well.

“The biggest problem,” said Scarborough, “is this confirms conservatives’ worst suspicions about Barack Obama — that he wants to centralize power in Washington, D.C. and he’ll even walk on the rights of Catholics and other people of faith if he has to do it.”

Have a look, from MSNBC: