Joe Scarborough Slams Conservative Bloggers: ‘I’m Always Right And It Pisses You Off’ 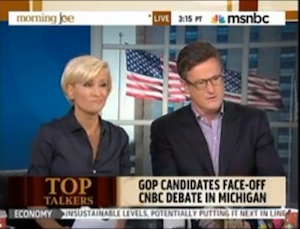 On Thursday’s Morning Joe, Joe Scarborough took a swipe at conservative bloggers for calling the MSNBC host a “Republican-In-Name-Only” for criticizing many of the now-struggling Republican candidates. “I hate to tell you the truth when it upsets you so much–I don’t want to screw up your morning,” Scarborough snarked, “I’m just always right and that offends you too–but go ahead. I’m talking to right-wing bloggers now. Nothing personal. Right-wing bloggers, I know it drives you crazy: I was right about Bachmann. I was right about Perry. I’m right all the time. And I know my Republican party better than you know your Republican party and it pisses you off and I understand why it would. Because you’re always calling me a RINO and I’m always right about my party and you’re always wrong.”

“The people who are going to get upset, and you know, start Tweeting from the basement,” joked Mike Barnicle “Right now, they’re Tweeting!”

“With the Cheetos!” Scarborough interjected.

Barnicle noted that the first Republican primary elections were fast approaching. “Take a look at the calendar, because with Christmas and New Years in effect you have six weeks. Six weeks to do this: come on!”

Scarborough has of late received much flak for being vocal in his bashing of various Republican candidates by conservative bloggers like Newsbusters’s Noel Sheppard , who said his “incessant attacks on all the Republican presidential candidates has made Morning Joe almost as unwatchable as the painfully biased garbage MSNBC offers in prime time.”