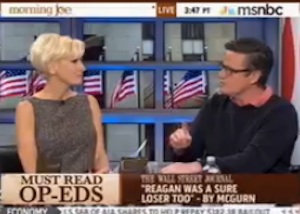 “What does it say about a candidate, though, who wrote an op-ed in 2009 saying that, please apply what we did in Massachusetts nationally on an individual mandate, and then goes on the campaign trail yesterday and just lies?” Scarborough opined. “I hate to be that blunt. I hate to use that word. Does anybody disagree with my characterization of what he said yesterday when he had been saying all along that he had just been talking about an individual mandate for Massachusetts? He lied yesterday. It’s on videotape. What does that — what are conservatives to think about that?”

Scarborough was referring to a statement Romney gave to a voter on the campaign trail (“Early on, we were asked if what you did in Massachusetts should be something you’d have the federal government do? I said no from the very beginning. No. This is designed for our state and our circumstance.”) and squared it with what he said in a USA Today op-ed:

There’s a better way. And the lessons we learned in Massachusetts could help Washington find it.

For health care reform to succeed in Washington, the president must finally do what he promised during the campaign: Work with Republicans as well as Democrats.

Our experience also demonstrates that getting every citizen insured doesn’t have to break the bank. First, we established incentives for those who were uninsured to buy insurance. Using tax penalties, as we did, or tax credits, as others have proposed, encourages “free riders” to take responsibility for themselves rather than pass their medical costs on to others. This doesn’t cost the government a single dollar.

Scarborough turned to his co-host to see if she had his back on what he was saying.

“You know, Mika, you flinched when I used the word ‘lie,'” Scarborough observed. “Is that what he did yesterday?”

“And you know, the thing is, he didn’t have to do that,” Scarborough continued. “Not to go too far off the subject, but I had called somebody in business. I asked for this person and the assistant said, ‘he’s not here.’ And the next time I saw her, I said, ‘Here’s just a friendly tip, never lie. You could have told me 1,000 different things. You did not have to lie. I knew he was in the office. Now I’ll never trust you again.’ There were 1,000 different ways Romney could have handled that yesterday. Why tell people something that they know is untrue?”