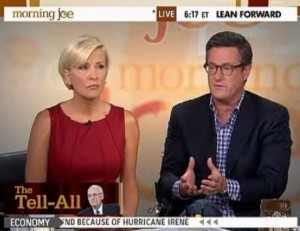 In discussing former Vice President Dick Cheney‘s cranial grenade of a memoir Monday, Morning Joe host Joe Scarborough seemed to ever-so-gently suggest that the Iraq War had something to do with the Arab Spring, the series of uprisings in Mideast dictatorships. The premise got all the traction of a Yugo on a hockey rink, and even managed to unite The Earth Institute‘s Dr. Jeffrey Sachs and conservative commentator Pat Buchanan in the common cause that Cheney, Bush, and the Iraq War succeeded only in weakening the United States.

Scarborough seemed to kind of back off of the premise even as he asked the question of Sachs, saying, “You look forward a decade, and Pat Buchanan was against the war, a lot of people were against the war, I know you were against the Iraq War, but you look a decade later, and it’s remarkable how much the Middle East has been transformed with the Arab Spring. We don’t know what caused it, ten years from now, it’s gonna be much different than it is now, but talk about the tumultuous changes, some good, some bad, that were set loose by events of 2001.”

Sachs responded that the intervening decade has seen the United States become a failing superpower, a sentiment echoed by Pat Buchanan, and both laid the blame at Bush and Cheney’s feet. Sachs declared Cheney “one of the most dangerous people who has ever served the United States.”

The President may be deserving of some criticism for continuing to use the toolbox that Bush and Cheney left him, but the President’s quick, comparatively inexpensive, US casualty-free success in Libya, and the killing of Osama bin Laden on his orders, form the bright line that Scarborough and Sachs should be drawing to separate Obama from Bush and Cheney.