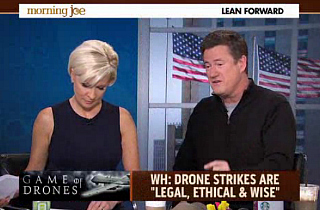 On this morning’s edition of Morning Joe, the panel took on the leaked document showing how the Obama administration justifies its expanded executive authority to assassinate an American citizen abroad through drone strikes. Host Joe Scarborough clashed a bit with other panelists as he felt the entire ordeal is a “frightening” development in Obama’s administration.

He continued: “There are no checks and there are no balances. We can kill you. We can pick you out of a list and drop a bomb on you, and not only can we kill you, we can then kill your 16-year-old son who is not even affiliated with al Qaeda, and then we can blame it on the father for us having to kill the son.” Scarborough then urged Republicans to take it to the House and Senate floors to decry this executive abuse.

Mark McKinnon added: “Forget Republicans. How about liberals and Democrats? I mean, can you imagine if George W. Bush had proposed this idea?”

However, McKinnon then disagreed with his co-panelists: “I agree with the policy. I think it’s a good idea.”

“Thinking about the threats against us and the machiavellian plots, I’m willing to err on the side of giving a little bit of latitudes,” the former Bush advisor said.

“This kid, this 16-year-old kid goes out to a restaurant and he gets killed because of his father,” Scarborough said, citing the assassination of Abdulrahman al-Awlaki. “That causes you no concern? Constitutionally?”

“I err on giving the government latitude on this one,” McKinnon doubled down.

Panelist Jon Meacham added that just like British control of the colonies fell because “the rule of law could not simply be in the hands of a king and could not be arbitrarily applied and that’s precisely what this is: it’s in in the hands of an American king.”

“An American king who actually gets the list of people who he decides who should be killed and who should not be killed and he goes down that list, and there’s so many things that are chilling here,” Scarborough said, before noting that if Bush were president, there would be impeachment hearings immediately over the drone strikes. “All of Washington, all of Manhattan, the entire press corps would focus its intention on this unprecedented overreach,” he said.

Willie Geist then chimed in: “I have a big problem will people being held at Guantanamo Bay without charge and for years and a decade, but I have a bigger problem with people who are being killed without charge in the field of battle. So if you’re outraged about enhanced interrogation, you should really be outraged about someone being killed on the spot of suspicion of being a terrorist.”

Scarborough then, once again, tore into the White House’s actions: “When you kill somebody without probable cause or evidence, that’s right there, and then you make it an American citizen who is protected by the United States Constitution, and suddenly that raises it to an entirely new level. And the U.S. government can decide which American citizens it’s going to kill without probable cause?”

“That is frightening,” he concluded. “And, of course, the next step is the killing starts taking place on American soil. We’re not far from that.”