Joe Scarborough: ‘There Is Always A Strain Of Anti-Semitism’ At Ron Paul Events
video

Joe Scarborough: ‘There Is Always A Strain Of Anti-Semitism’ At Ron Paul Events 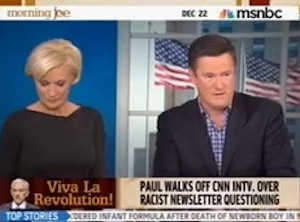 During a discussion about Ron Paul‘s controversial newsletters sent in his name during the 1990s on Thursday’s Morning Joe, Joe Scarborough provocatively observed “There is always a strain of anti-Semitism” at the Republican presidential candidate’s events.

“There is a tension that we need to explain here among Ron Paul supporters,” Scarborough explained. “There are some who will embrace his domestic agenda, embrace the idea of a smaller government, even if they don’t agree with everything. And they have been saying for some time, with their eyes rolled about foreign policy. But also, (they) go away from an event saying there is always a strain of anti-Semitism — I’ve never heard the racism part, but always a strain of anti-Semitism there.”

“I think when you read the statements in his name, the problem is that you are not dealing with someone that has dealt with any forthright manner what happened,” MSNBC commentator Al Sharpton opined. “You can say something and later say, I shouldn’t have said it, I apologize, you can say something and say ‘I was misunderstood.’ All of us have gone through that. You can’t say something and then turn around and act as though you didn’t know it was said…and then you get angry when people ask about it. That’s the danger zone that he’s in.”

Watch Scarborough’s comments on Ron Paul events below via MSNBC: