Joe Scarborough To Agreeing Chris Christie: ‘There Need To Be Limits’ To First And Second Amendments 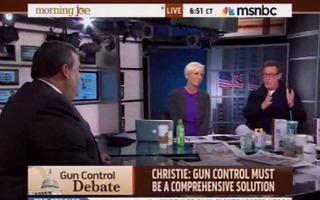 MSNBC host Joe Scarborough sat down with New Jersey’s Republican Gov. Chris Christie on Wednesday to discuss Washington’s ongoing effort to reach a consensus on a legislative remedy to gun violence. Scarborough criticized both his conservative and liberal friends for their intransigence in this debate. He said that he felt it was obvious that “there need to be limits” to both the First and Second Amendments to the Constitution.

RELATED: Scarborough Questions ‘Long-Held’ Beliefs After Newtown: ‘Ideologies Of My Past Career’ No Longer ‘Relevant’

“Most of my conservative friends agree; these survivalists don’t need assault weapons,” Scarborough said. He went on to isolate what he thought was a strain of hypocrisy among his liberal friends.

Christie agreed again, and added that media violence in movies and video games needs to be addressed as much as firearm access to prevent future mass shootings.