Joe Scarborough To David Gregory: Herman Cain Is ‘On A Glorified Book Tour’ 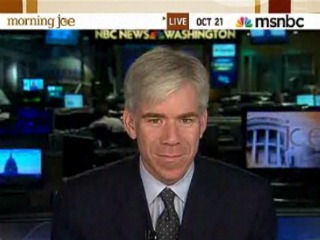 Meet the Press‘ David Gregory paid a visit to the Morning Joe crew this morning to share a theory on what, exactly, Herman Cain is doing in our national spotlight. Is he just here to promote his book?

Host Joe Scarborough introduced Gregory by asking him to weigh in on how Cain’s recent “pro-choice” admission to CNN CNN’s Piers Morgan will play out in Iowa. Gregory admitted he was perhaps a bit confused by whatever strategy it is that Cain is undertaking:

The thing that strikes me about Herman Cain, and when I interviewed him last week it first came up, you know this business about making a joke about an electric fence or his performance in the debate where he says, “Well, you know, I wasn’t asked about Al Qaeda and letting a hostage go” when it’s so clearly there on the table. I mean, it just… He’s either not remembering things or he’s just playing a little bit loose on some of these things, but it’s not a good strategy. You know, you can’t play that loose on some of these issues and be shown to be ill-informed or to just be that inconsistent.

Scarborough responded by noting that, as he and the mainstream media sees it, Cain is basically “on a glorified book tour” and that he “does not appear, by any objective standard, to be running a presidential campaign.”

Have a look at the full segment, courtesy of MSNBC: