Joe Scarborough To Those Calling Jeb Bush A RINO: ‘Just Shut The Hell Up,’ You’re Not Future Of The GOP
Video

Joe Scarborough To Those Calling Jeb Bush A RINO: ‘Just Shut The Hell Up,’ You’re Not Future Of The GOP 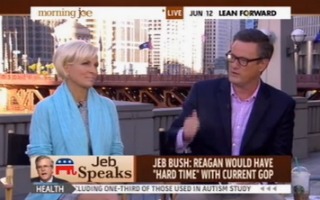 On Tuesday, Morning Joe host Joe Scarborough had a thing or two to say to those who would criticize former Florida governor Jeb Bush as being a “RINO” for recent comments he’s made about the GOP in general, and Republican presidential candidate Mitt Romney in particular.

RELATED: Jeb Bush: Obama Should Give My Brother George ‘A Little Tip Of The Hat’

“Let’s see,” mused Scarborough over his coffee (brewed by Starbucks, in case you were wondering.) “If i’m going on intrade and trying to figure out whether the future of the republican party belongs to Grover Norquist, who I know and like, or the Jeb Bushes of the world, I’m pretty confident Jeb wins.”

You know, you can go online and act like a jackass and say what you want to say. And now everybody is calling Jeb Bush a RINO. Just shut the hell up.

You can stay in your mother’s basement, you can eat your Cheetos, you can type on your dinty laptop, that’s all you got. But you are not the future of the Republican party, so keep screaming at your walls downstairs, your day is done. Jeb did something very important that I wish Mitt Romney would have done couple of years ago when Glenn Beck was calling the President of the United States a racist and a bigot. Jeb is speaking out. I think other Republicans are starting to speak out. Mitt Romney doesn’t have the courage to speak out against this type of hatred, but our day is coming, Mike. Our day is coming. When that party reemerges, oh, my god. The following they will get from swing voters.