Joe Scarborough: War On Planned Parenthood Is Not A War On Women
Video

Joe Scarborough: War On Planned Parenthood Is Not A War On Women 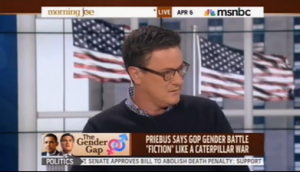 On Friday, Morning Joe host Joe Scarborough weighed in on the discussion surrounding RNC chair Reince Priebus‘ recent remark that a “war on women” is little more than a fabrication by the media and is about as realistic as a GOP “war on caterpillars.”

Scarborough’s MSNBC colleague, Andrea Mitchell, who had reported on the comment early Thursday afternoon, placed the comment in context, saying that “it was a figure of speech, and people pounced — including myself — about the caterpillars. And he said he wasn’t trying to compare people to insects.”

“One thing I don’t think we’ve said here that just needs to be out here…” said Scarborough, is that “some of the most intense conservative pro-life people I have ever met are women in the Republican party. Most of the people that write me really nasty emails — and I’m sure you all get them and text on social issues — are mainly women. It’s not just men in the back rooms of country clubs that are putting these pieces of legislation together.”

The panelists agreed that Priebus hasn’t been comparing women to insects, merely that he’d used a clumsy metaphor to make his point — a point that some have found offensive on its own, given they disagree with Priebus and do see a very real, ongoing attack on women.

“A war against Planned Parenthood,” he concluded, “is not seen by many women in America as a war on women.”