Joe The Plumber On Ed Schultz’s Insistence That GOP ‘Protects’ Wealthy: ‘So Do Democrats.’ 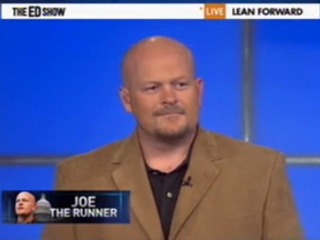 On his show tonight (Now at 8 pm! Still not used to it!), MSNBC’s Ed Schultz spoke with Samuel Joseph Wurzelbacher (the artist formerly known as Joe the Plumber) about his congressional aspirations.

RELATED: Joe The Plumber To Lawrence O’Donnell: Are We Going To Talk About Me Or Herman Cain?

Mr. Schultz (“Ed is fine”) kicked things off by asking Wurzelbacher what, if anything, he’d do about the fact that wages among the top one percent of American have increased while those for the other ninety-nine have more or less flatlined. Wurzelbacher turned Schultz’s question back at him, asking what Democrats have done to “change the tax structure” in order to “level the playing field.”

“Keep It Simple, Stupid,” Wurzelbacher advised. “That’s the secret to life.” Plus, he added, it’s not productive to lay the brunt of blame on Republicans in Washington for their “coddling” (to borrow a term from Warren Buffett) of the wealthy where taxes are concerned:

When you sit there and say it’s the Republicans doing it and not the Democrats, that’s where you’re doing a disservice to the American people, because the Democrats are gettin’ their money from the very same people, you know. They have the same fund raisers. You know, essentially it seems they’re in cahoots.

His advice to people concerned with stagnant wages? “Get involved in your civic responsibility.”

Schultz seemed baffled that Wurzelbacher would be running as a Republican since they “protect” corporations and the wealthy. “So do Democrats,” he responded. Schultz seemed to want to get Wurzelbacher to somehow admit the right is solely to blame for stagnant wages, but Joe wasn’t about to budge, insisting instead that the problem lies in an overly complicated tax system and a lack of available American jobs.