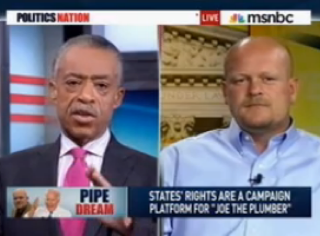 “The most famous plumber in the country” is unhappy with Vice President Joe Biden‘s comments that being a private businessman doesn’t qualify you to be president any more than being a plumber. For some reason, Samuel “Joe The Plumber” Wurzelbacher chose as a venue to air his grievances PoliticsNation, where he found more common ground than one would expect with Al Sharpton about the fundamentally flawed tax code.

RELATED: Joe Biden: Working In Private Equity ‘No More Qualifies You To Be President Than Being A Plumber’

“The blue collar, we’re the ones that built this country– you’d think we’d have an understanding of how to run it,” Wurzelbacher told Sharpton in response to Biden’s comments, arguing that “our Founding Fathers wanted people like you and I to come up and represent our communities.” Sharpton declined to defend Biden but noted that “we can find common ground on the tax front,” as both were bothered in different ways by the current tax code. Wurzelbacher argued that he was “tired of these subsidies and incentives,” lauding Herman Cain‘s 999 plan. Sharpton didn’t bite, instead asking how, as a blue collar worker and supporter, Wurzelbacher could support Romney, “who has two degrees from Harvard.”

“I’m not here to talk about Mitt Romney,” Wurzelbacher replied, adding that he was going to support Romney because he had “fulfilled his American dream… [and] he didn’t ask for handouts from the government.” Sharpton also asked about collective bargaining rights, something Wurzelbacher thought belonged exclusively to the private sector. “You’re quite a different kind of Republican,” remarked Sharpton.

The segment ended on a conciliatory note, with Sharpton agreeing with Wurzelbacher that “all we hear is gossip and drama” and not policy issues. All in all, the two had a very amicable chat with far more agreement than one would expect from two firebrands on either side of the spectrum– it wouldn’t be surprising to see Wurzelbacher surface, should he lose his bid for Congress, as a recurring guest alongside Sharpton, and the latter is served well by having more Republicans challenging him (in a friendly way!) on a program often riddled with too much agreement to be challenging.