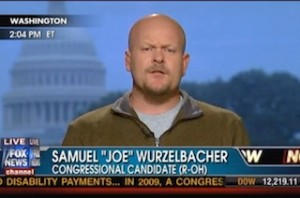 Samuel “Joe the Plumber” Wurzelbacher is the real-life Chauncey Gardner character who has become somewhat of a national sensation due to a conversation that he had with then candidate Barack Obama. Since then “Joe the Plumber” has guested on numerous cable news programs, visited Israel as some sort of dignitary, and recently decided to run for congress for his Cleveland area district. Today he discussed his candidacy on Megyn Kelly‘s America Live and revealed that he wasn’t totally against the Occupy Wall Street movement, saying that he found protesters to be “really great people” with whom he shared similar concerns.

Many have seen Joe the Plumber’s presumptive rise to political as some sort of cruel political joke; he is, after all, not trained in any political science or legal background, and his plain-spoken populism appears to be straight from the Sarah Palin school of political rhetoric. But that’s precisely why his political personality has resonated with many of his biggest fans.

Adding a reasoned recognition of the frustrations felt by many of the Occupy Wall Street protestors, when many right-of-center pundits and GOP candidates have been dismissive, only gives Wurzelbacher some indie cred; one can’t purely call him a puppet of the right when he is candidly sharing some (not a ton) of good will towards the protest movement.

What will be interesting to watch is how Wurzelbacher’s feelings towards the OWS movement will shift and evolve in the coming days, after handlers and respected advisers opine on how to best get elected. Until then, we can enjoy this moment when this hero to the Tea Party movement is actually recognizing some real frustrations with the OWS movement. Watch the clip below and see for yourself, courtesy of Fox News: