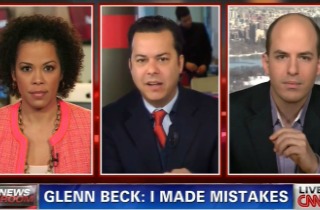 Perhaps the camera position at The Daily Beast’s headquarters lacks a monitor which would allow their pundits to see themselves as the audience does.

That, it would seem, is the only way to explain how their executive editor, John Avlon, surrendered the moral high ground on Thursday and rained base insults down on TheBlaze founder Glenn Beck while discussing the conservative broadcaster’s recent contrition and appeals for comity.

Described by CNN anchor Carol Costello as a broadcaster who had once embraced “incendiary rhetoric” and “conspiracy theories,” Beck has recently engaged in an effort to rehabilitate his image by attacking anti-gay prejudice and lamenting his own role in fracturing the nation along ideological lines.

Avlon joined The Blaze host Amy Holmes, an employee of Beck’s, and CNN host Brian Stelter to discuss the conservative media mogul’s change of tune. In spite of Holmes’ admitted conflict of interest, she came off as far more approachable and introspective than Avlon who preferred to hurl insults at Beck in lieu of arguments as to why his apparent change of heart should be dismissed.

“This apology is too little, too late,” Avlon began. “He presented himself as king of the wing-nuts. He road it to fame and fortune by consciously dividing the country, and he knew he was doing it because he’s a very talented broadcaster.”

RELATED: John Avlon Dismisses GOP ‘Talking Points’ on Christie’s ‘BridgeGate’ Even While Agreeing with Them

Avlon inserted this bit of perfunctory praise in order to buttress his psychological analysis of Beck to support his assertion that the broadcaster’s attacks on the president in 2009-2010 were a premeditated effort to bifurcate the country and aggrandize himself. But, remember, it’s Beck that is the conspiracy theorist.

For his part, Stelter praised Beck’s recent bout of self-reflection, but also theorized that this change is born entirely of self-interest. “Glenn Beck is in the business of trying to get a cable channel nationally distributed,” he said. “He needs as many cable operators and people to like him as possible.” Think of this theory what you will, at least it is a coherent argument.

Holmes asked her fellow panelists to “put away the knives.” Lacking concrete reasoning for discounting Beck’s apologies as insincere, she advised her colleagues that it might be prudent to take Beck’s change of heart at face value. Avlon was having none of it.

“If Glenn Beck can help turn peoples’ minds and hearts who he’s helped poison in the past with hyper-partisanship and polarization, great,” he said. “If he can actually convince people that those folks who believed him were mistaken by buying his snake oil, his bile – but you’re culpable for what you do.”

“He’s got to be responsible for what he did when he had his moment of maximum influence,” Avlon concluded, apparently forgetting that Beck’s attempt to atone was the very subject of the panel discussion in which he was participating.

Beck is correct to address the excesses he allowed himself in while at Fox. And his unduly credulous dissemination of conspiratorial narratives, the most recent having occurred slightly less than a year ago, are offenses for which he should answer. That, it would seem, is precisely what the conservative broadcaster appears to be doing.

Short of setting himself on fire in the public square, however, it is hard to see how Beck could make adequate amends for what Avlon seems to believe are his indelible sins. Immolation is, after all, the preferred form of restitution for those heretics who offend the faith, and centrism has become a religion in itself for some. Even if one agrees with a partisan statement, this religion’s tenets demand, it is critical for the faithful appear as though they do not.

Based on Avlon’s animated condemnations, there is no amount of apologizing that could account for Beck’s transgressions in this life. I suppose there’s always the next.