John Boehner Presser On Fiscal Cliff: I Hope ‘2013 Is Finally The Year’ For A Grand Bargain 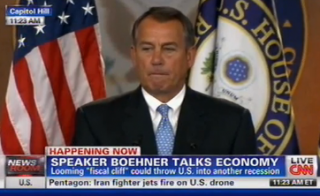 Speaker John Boehner delivered remarks and took questions from press on Friday, ahead of President Barack Obama‘s scheduled remarks on the economy. Noting the need to tackle the “fiscal cliff” and reach bipartisan solutions, Boehner said “this is an opportunity for the president to lead.”

“This is his moment to work on a solution that can pass both chambers,” Boehner said, also adding that he add a “cordial” meeting with the president earlier this week.

Boehner expressed hope that “2013 is finally the year” the government can agree on a grand bargain on spending and debt. “When the President and I have been able to come to an agreement,” he said, “there’s been no problem getting it passed in House.”

Regarding a tax deal specifically, the Speaker argued that “raising tax rates will slow down our ability to create the jobs that everyone says they want.” Reinforcing an often-cited Republican argument, Boehner said the problem with raising taxes on the wealthiest “is that more than half are small business owners.”

Asked if he’d use the debt limit as leverage, he replied, “It’s an issue that’s going to have to be addressed.”

During the question-and-answer portion, Boehner was also asked about immigration. Noting he was “not going to get any details,” he said, “on an issue this big, the president has to lead.”

Speaking more broadly about the Republican party itself, Boehner said the principles of the party are sound, but: “It’s clear that as a political party we have some work to do.”

Watch the presser below, via CNN: