John Bolton: After Years of Dem Bush-Bashing on Iraq, I’m ‘Delighted’ to See Shoe on the Other Foot 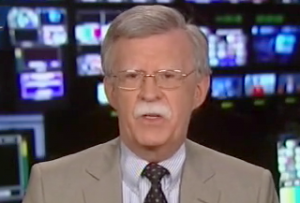 Impending military strikes in Syria have invited comparisons to the Iraq lead-up ten years ago, but members of the Bush administration have been divided on whether President Obama should fire a “shot across the bow” at Syria for the use of chemical weapons, as neatly documented in this POLITICO piece. In particular, former U.N. Ambassador John Bolton warned against the “feckless use of military force” that could damage the U.S.’ credibility. On Fox News today, Bolton couldn’t help but point out how President Obama, Vice President Joe Biden, and Secretary of State John Kerry were all very critical of unilateral action under Bush, saying he’s “delighted” that now the shoe’s on the other foot for them.

Bolton found it “fascinating to watch” the current run-up to possible strikes in Syria, especially for the political parallels. He said Democrats criticized the Bush administration for “reliance on imperfect intelligence,” when really “all intelligence is imperfect.” Bolton also noted Bush was attacked for acting unilaterally, first making it clear Bush had a coalition of nations behind him, before deadpanning, “So far in this episode it looks like we have France.”

Bolton couldn’t help but find the Obama team’s actions somewhat amusing, considering what they were saying about him and Bush years ago.

“Personally, as somebody who was frequently criticized by Joe Biden and John Kerry and Barack Obama… for being a unilateralist, while I oppose the use of force against Syria, I am delighted that the Obama administration is about to act unilaterally with no approval from the U.N. Security Council. I think we should all take due note of that.”