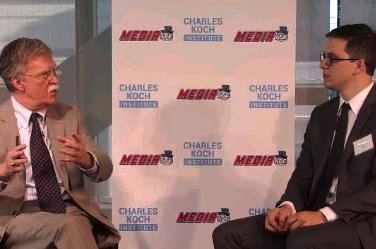 Former Ambassador to the U.N. John Bolton helped kick off Mediaite’s “Privacy, Security, and the Digital Age” event Tuesday night by sitting down for a discussion with moderator Andrew Kirell about his views on the NSA that have come into wider view since Edward Snowden leaked information about programs the agency uses.

Bolton, who has issued plenty of criticism towards Snowden in his role at Fox News contributor, prefaced the discussion by saying, “I don’t trust anything the government does.” But, he said, since he believes the government has a duty to protect the people from harm, he finds the foreign intelligence program run by the NSA to be “fully justified.”

When Kirell asked him specifically about attacks that have been foiled by the NSA programs, Bolton pointed out that surveillance is not just meant to prevent attacks, but to gain intelligence on current or potential terrorists. He referred to most of the anti-NSA rhetoric out in the world as “scare stories, misinformation and propaganda.”

“It troubles me greatly” that people like Snowden and Bradley Manning had access to the information they did, Bolton said, saying he finds it “extremely dangerous” that the country’s top secrets could so easily fall into the hands of foreign governments.

Given these concerns, Kirell asked if Bolton believe journalists should just “be silent” when given access to information like the documents Glenn Greenwald received from Snowden. Bolton took this opportunity to explain that he believes there’s no such thing as this “privileged” designation called “journalist” and that the government should not reserve any special protections for journalists that they would not extend to any other individuals.

At the same time, he called it “ridiculous” that Justice Department labeled his Fox News colleague James Rosen a “co-conspirator” during a recent investigation. The difference between Rosen and someone like Snowden, according to Bolton, is that Snowden “took an oath” to protect secrets and broke it. He said Snowden “deserves to be punished” for what he did and “if he’s really sincere, he should get his butt back to the United States” and pay for his crimes.

Bolton, who worked under several Republican administrations, noted the irony that until President Obama, the number of leak investigations were “infinitesimal.” He said he found it “bemusing” that “It takes a left-wing Democrat to go after the press,” he said, “when those squishy Republicans let them get away with it.”