John Bolton: ‘Obama Is Too Smart, Too Sophisticated, And Too Nuanced To Believe In Victory In Libya’ 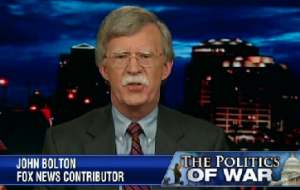 Former Ambassador to the UN John Bolton appeared with Sean Hannity last night and may have a strange problem on his hands in case he decides to run for the Republican nomination for President. Unlike most politicians who backpedal from statements that can be overly inflammatory, Bolton might regret saying something many would interpret to be a compliment to President Obama.

After watching the entire interview, it is abundantly clear that Bolton thinks the effort in Libya now represents “the failure of the Obama administration to understand what its goals are or how to get there” and even suggests “the Constitution doesn’t bar incompetence, which is what we have here.” And in case anyone doubts Bolton’s true feelings, he slams Obama for his “haphazard” decision-making, his failure to outline a clear objective, and his inability to get agreement between our allies regarding what we are supposed to achieve. Then Bolton really lays into Obama saying “the President is too smart, too sophisticated, and too nuanced to believe in victory. He believes in something else.”

Is that last statement really intended to be a criticism of Obama? Would Bolton prefer a President who is not smart, unsophisticated and sees the world simply in black and white? Recently, likely Republican candidate for President Mitt Romney also derisively used the term “nuanced” to describe Obama. There is very legitimate criticism to be heard about Obama’s strategy in Libya, but to fault him for trying to “think” about all the alternatives seems absurd.

Instead, Bolton makes much more sense on the more specific question of whether Libyan leader Muammar Gaddafi should be removed from power. Bolton says, “I’m very worried that unless the display of military power we’ve seen so far pushes Gaddafi out of the country, that we can be in for a long, long slog here.” Without defining victory and forcefully pursuing it, Obama might effectively keep the conflict ongoing, which is a very legitimate and convincing critique Bolton raises. However, Bolton’s argument that part of the problem is because the President is smart, sophisticated and nuanced seems to ignore the fact that an absence of such characteristics in a leader are likely to lead to far worse problems.