John Edwards On His Trial: I Didn’t Do Anything Illegal, But ‘Awful, Awful Lot That Was Wrong’
video

John Edwards On His Trial: I Didn’t Do Anything Illegal, But ‘Awful, Awful Lot That Was Wrong’ 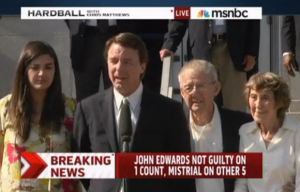 John Edwards‘ corruption trial came to a close today, with the jury finding him not guilty on one count of illegal campaign contributions and deadlocked on the 5 other counts, leading the judge to declare a mistrial. Following this announcement, Edwards gave a statement, plainly acknowledging his “sins,” but noting he does not believe he did anything illegal.

RELATED: John Edwards Found Not Guilty On 1 Count, Judge Declares Mistrial On 5 Others

Addressing the case, he said, “While I do not believe I did anything illegal … I did an awful, awful lot that was wrong.” No one else is responsible for that, he said; no one who testified, no one in the government. “There is no one else responisble for my sins,” Edwards said. “It is me and me alone.”

Edwards thanked the jury for their diligence, saying, “Thank goodness that we live in a country that has the kind of system that we have.” He further went on to thank his family, specifically his children. In particular, he spoke of “precious Quinn” and Cate Edwards — who has been at the trial, supporting him “no matter what,” regardless of any unpleasant evidence that arose. “She never once flinched,” he said.

“I don’t think God’s through with me,” Edwards said, expressing his belief that there are still “good things” he can do. He noted children in poverty, saying he’d like to help their cause in any way he still can. Circling back to the topic of family, Edwards noted, “I want to dedicate my life to being the best dad I can be.”

Take a look at his remarks, via MSNBC: