John Heilemann: ‘Flailing’ Obama Campaign ‘Has Been Horrible Since The Debates’
video

John Heilemann: ‘Flailing’ Obama Campaign ‘Has Been Horrible Since The Debates’ 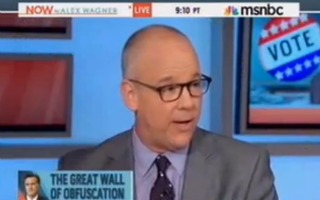 On Tuesday, New York Magazine reporter and co-author of Game Change, John Heilemann, slammed President Barack Obama’s response to his lackluster debate performance last week on MSNBC. Heilemann said the president has made a bad situation worse, and his campaign’s response has been “horrible” and “flailing.” He stressed that things like the Big Bird ad are symptomatic of a campaign that appears externally to be virtually rudderless.

Heilemann recalled his conversations with senior Obama campaign adviser David Plouffe, who said that the campaign would target Mitt Romney in two, seemingly contradictory ways. Plouffe said that they intended to hit Romney for being a flip flopper with no core values, but at the same time they would target him for harboring extreme right wing values at odds with what most Americans believe.

After detailing what he seemed to think was a strong strategy, Heilemann slammed the Obama campaign for not sticking to it.

“I think they have been horrible since the debate,” said Heilemann. “They are flailing right now. And the stuff they’re saying, the Big Bird ad, all of it.”

MSNBC host Alex Wagner cut him off, saying that the Big Bird ad would be the focus of the next block. “Good,” said Heilemann. “Let’s talk about how horrible the Big Bird as is in the next segment.”