John Kerry: I ‘Often Agree’ With Tom Friedman, But Not on Syria 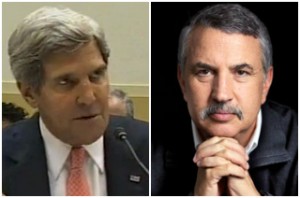 New York Times columnist Tom Friedman found himself in the middle of the Syria debate Wednesday after he penned a column titled “Arm and Shame” that appeared in today’s print edition of the paper. When Rep. Steve Chabot (R-OH) asked Secretary of State John Kerry to comment on Friedman’s assessment during today’s House hearing, Kerry admitted he “often agrees” with the columnist, but not in this case.

In his column, Friedman argues that the Obama Administration should replace “shock and awe” with “arm and shame,” explaining that “the best response to the use of poison gas by President Bashar al-Assad is not a cruise missile attack on Assad’s forces, but an increase in the training and arming of the Free Syrian Army.” He adds that the U.S. must also publicly “shame Assad, his wife, Asma, his murderous brother Maher and every member of his cabinet or military whom we can identify as being involved in this gas attack.”

“I don’t always agree with him, in fact I seldom do,” Chabot said of Friedman, “but I tend to agree with his assessment of the Syrian situation today, where he says that rather than firing missiles into Syria, a more effective measure would be arming and assisting the more moderate rebel groups.” Chabot said his only “concern” about this course of action is that by waiting so long, the U.S. “has allowed Al Qaeda-connected rebel groups to become more influential and powerful.”

“I think what Tom Friedman said–and I often do agree with him–I don’t happen to in this particular occasion because he said you should ‘arm and shame,'” Kerry responded. “I don’t think Assad is going to be ‘shamed’ into any particular activity, nor are the Russians and others.”

If the U.S. does as Friedman suggests and doesn’t “deteriorate” Assad’s capabilities, Kerry said, “you have opened Pandora’s Box for the use of chemical weapons.”

“So with all due respect to Tom Friedman, who is most-often correct,” Kerry said, “on this occasion it is absolutely vital that we send the message and deteriorate his capacity.”

Friedman was friendlier to the Obama Administration earlier in the summer when it came to the NSA surveillance program. On that issue, he accused those defending NSA leaker Edward Snowden of “behaving as if 9/11 never happened.”