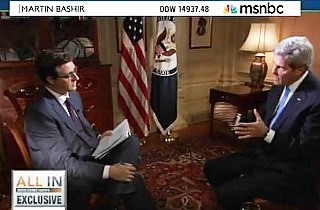 MSNBC host Chris Hayes may be his network’s the most outspoken critic of the White House’s push for intervention in Syria. On Thursday, he sat down with Secretary of State John Kerry who attempted to explain President Barack Obama’s decision to intervene in that conflict in an exclusive interview which will air tonight. Hayes told Martin Bashir that, even after speaking with Kerry, he remains unconvinced that intervention can accomplish its stated objectives.

Kerry told this to Hayes in an exclusive interview that the MSNBC host talked about in an appearance on Bashir’s program.

RELATED: John Kerry: I ‘Often Agree’ With Tom Friedman, But Not on Syria

Hayes said that Kerry insisted that violent, jihadist rebels in Syria will be strengthened if the U.S. does not act. “I don’t necessarily think that is the case,” Hayes said. He added that Kerry did not tell him that he does not believe the administration can accomplish the objectives it has outlined in Syria with military force.

“He is putting the credibility of this personally on the personal shoulders of John Kerry,” Hayes said of President Barack Obama.

Hayes said that, looking at the whip counts in the media measuring support in Congress for a resolution authorizing force in Syria, “they’ve got an uphill battle.”