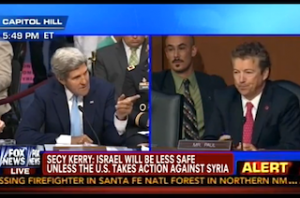 Sen. Rand Paul (R-KY) spent the first part of time during Tuesday’s Senate Foreign Relations Committee hearing challenging Secretary of State John Kerry on his dedication to the U.S. Constitution. But soon enough, Kerry had turned the tables, making sure Paul knew just how serious he takes the business of war.

Kerry pointedly repeated back to Paul one of the many presumably rhetorical questions the senator asked him minutes earlier. On the possibility that Bashar al-Assad could use chemical weapons again, Kerry asked, “If the United States of America doesn’t do this, Senator, is it more or less likely that Assad does it again? You want to answer that question?”

When Paul said the answer was “unknown,” Kerry shot back “Senator, it is not unknown. If the United States of America doesn’t hold him accountable on this, with our allies and friends, it is a guarantee Assad will do it again–a guarantee–and I urge you to go to the classified briefing and learn that.”

Kerry then moved on to the questions of whether Americans “want” to go to war. Speaking for himself, Defense Secretary Chuck Hagel and General Martin Dempsey, along with Sen. John McCain, who have all been to war (unlike Paul), Kerry said, “not one of us doesn’t understand what going to war means and we don’t want to go to war.”

He added that he, Hagel and Dempsey don’t consider the proposed “limited action” the same as “going to war.” Kerry proceeded to lay out his case to Paul on why the decision to strike Syria should not be based on opinion polls:

“When people are asked, do you want to go to war in Syria? Of course not. Everybody, 100% of Americans would say no. We say no. We don’t want to go to war in Syria either. That’s not what we’re here to ask. The president is not asking you to go to war, he’s not asking you to declare war, he’s not asking you to send one American troop to war. He is simply saying we need to take an action that can degrade the capacity of a man who’s been willing to kill his own people by breaking a nearly 100-year-old prohibition, and will we stand up and be counted to say we won’t do that. That’s not–you know, I just don’t consider that going to war in the classic sense of coming to Congress and asking for a declaration of war and training troops and sending people abroad and putting young Americans in harm’s way. That’s not what the president is asking for here.”

When Kerry was finished, he asked General Dempsey if he had anything to add. Dempsey broke the tension in the room by saying, “No, not really Secretary, thank you for offering.”