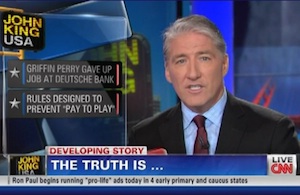 On CNN this evening, John King took Anita Perry to the cleaners over her comments that her husband was being “brutalized for his faith” and her assertion that President Obama was to blame for her son losing his job. “Brutalizing Rick Perry because of his faith?” King asked incredulously. “Well, not exactly, actually, not even close.”

King then brought up a quote the Texas First Lady said earlier today to an unemployed man in South Carolina that “My son lost his job because of this administration.”

“Here’s tonight’s truth: wrong again, Mrs. Perry, and again, not even close,” King proclaimed. “Griffin Perry did have to give up his job at Deutsche Bank because he’s been raising money for his father’s campaign and the Securities and Exchange Commission has rules governing political activities by investment advisors.”

“In other words, to keep people who may want to get some of the investments in a state pension program like the one in Texas from trying to buy political sway through campaign contributions,” King continued. “Those rules were tightened effective last year because of shenanigans too many to mention related to the 2008 mortgage mess and broader financial meltdown. Griffin Perry, the son in question, told ABC News recently he decided to put his career on hold to help his dad. He said it was his choice. So for Mrs. Perry to say “my son lost his job because of this administration” doesn’t pass the truth test or to borrow from the Texas lexicon, you might say it’s ‘all hat and no cattle.'”

Watch King’s segment below via CNN: