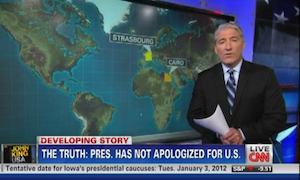 CNN’s John King called out Mitt Romney for making false claims about President Obama apologizing while making speeches abroad, something he has repeatedly claimed before. “While (Obama) has said some things that make Republicans mad and are fair game for criticism, President Obama has not apologized for America in the way Governor Romney and many other Republicans assert.”

Romney made the erroneous claim at the Citadel earlier today. “Let me make this very clear,” Romney said. “As president of the United States, I will devote myself to an American century and I will never, ever apologize for America.”

King explained that the Republican meme began with a Karl Rove editorial in April 2009, in which, Rove labeled Obama’s speeches abroad as an “apology tour.” “He has apologized on three continents for what he views as the sins of America and his predecessors,” Rove wrote.

“I can tell you firsthand the President bristles at the apology tour label and the idea he doesn’t view America as an exceptional nation,” King corrected. “He has, though, on several occasions…used very deferential language, conceding America’s mistakes, flaws and even arrogance. He insists being more humble was necessary in those early days because of the hits America’s image took and the Iraq War and what they call George W. Bush’s broader cowboy diplomacy image.”

In September, Politifact called Romney’s oft-used attack on President Obama “Pants On Fire”. “We found not a single, full-throated apology in the bunch. And on the new angle Romney has added — that the trips were intended to offer the president a forum to apologize to other countries — we think it’s a ridiculous charge. There’s a clear difference between changing policies and apologizing, and Obama didn’t do the latter. So we rate Romney’s statement Pants on Fire.”