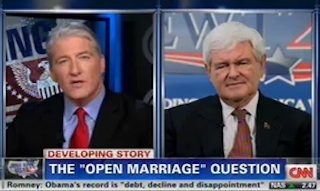 On CNN’s John King USA, King faced off with Republican hopeful Newt Gingrich for the first time since their heated debate exchange about his opening question on his alleged “open marriage” proposal. “I want to come back to your point there, sir. You were attacking me and calling me part of the elite media. We can debate whether it was an appropriate question at the beginning of debate. My business is debating that, but I could not have asked you the question if your ex-wife had not come forward. She’s a Republican, sir. She said she supports much of your principles. How was that an example of the elite media trying to protect Barack Obama?”

“Well, you have to ask yourself the question. Why would ABC go back many years, why would they dredge up something which had already been reported several years ago?” Gingrich replied. “Why would they do it two nights before a primary? Why would they refuse to have other witnesses rebut her? We offered them a number of people who were there at the time who said what she was saying just wasn’t true. I would just suggest to you that when the only person you get is an ex-wife who wants to testify on the air just before a primary with nobody allowed to rebut her, there’s something a little goofy about that design. And my point to you, John, was simple and I repeat it. You didn’t have to take the bait. You didn’t have to pick it up. You could have ignored ABC. We could have gone straight to energy policy, the economy, balancing the budget. There were lots of big questions we could have talked about instead of taking the time on something like that.”

We did talk about other issues but a lot of people in the state were talking about that issue that day,” King responded. “A lot of people think that exchange worked to your benefit. That’s not for me and my calculation. Have you spoke to your ex-wife at all? Why did she come forward at that time? I can’t speak for ABC but it says if you had offered people it would have interviewed them.”

“Oh, that is just plain baloney!” exclaimed Gingrich. “I mean, I’ll check with (my press secretary) R.C. Hammond in a minute. But if they’re saying that, they’re not being honest. They said explicitly the opposite. I will check with R.C. because he was briefing me on this the whole way through. We had several people prepared to be very clear and very aggressive in their dispute about that and they weren’t interested.”

Following his interview with Gingrich, King spoke with David Frum and Donna Brazile, expressing surprise that Gingrich did not come after him again. “He’s a much kinder, gentler guy,” King quipped.

Watch the interview via CNN: