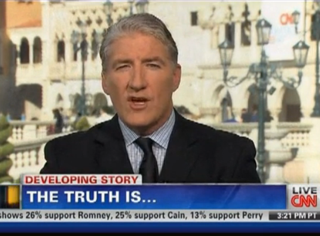 This morning on talk radio, John King received rare praise from Rush Limbaugh for pointing out the suspicious chronology in between the first time President Obama discussed the burgeoning Fast and Furious arms scandal and the time frame Attorney General Eric Holder gave for hearing about it himself. On tonight’s program, King thanked Limbaugh for the kind words, but refused to allow his report to corroborate conservative plotlines he considered to be “a huge stretch.”

On his program this morning, Limbaugh noted that King was “bringing up a contradiction” between what President Obama had said at the beginning of March and what Attorney General Holder had said six weeks later before Congress. The President ad said he was aware of the program then, though Holder could only describe his familiarity with it vaguely, describing the time during which he first heard about the program as “during the last few weeks.”

“While we’re always appreciative of kind words,” King noted, he found that there was a difference in between suspicion and fully calling out a contradiction in between Obama and Holder’s words. The facts, to King, “do not support the black/white contradiction” many conservatives see, and while he chided Holder for being unclear in a way that played into the hands of his political opponents, he warned that it was far too early to do anything but ask questions on the matter. “The truth is,” he concluded, “it’s a stretch– and a huge stretch to say anything beyond that.”